The Pokemon Trainer Academy is a sandbox style roleplay originally created by user Jackblaze but handed down to users PkMnTrainer Yellow and Megaman765 when Jackblaze left the site for an extended period of time. The RP has changed a great deal since its creation, however fundamental changes were avoided whenever plausible. The RP currently sports a Best Veteran Roleplay award from the fourth quarter of 2011, and to date has grown to become the largest RP in the history of the site, as well as one of the longest lasting ones. It currently hosts over 6000 posts in it's IC thread, over 30 registered roleplayers, controlling over 50 characters. An activity threshold of at least 1 post per week is required by the GMs to avoid being considered for removal from the roleplay.

The Pokemon Trainer Academy is, in PkMnTrainer Yellow's own words, of humble origins. At its core, it is simply a school located on a very clearly defined setting where roleplayers are allowed to play either a young and upcoming Pokemon Trainer at the school or a teacher. Later in the roleplay, the ability to apply for a Team Rocket spy was implemented. Character interaction is the primary focus of the RP, and it was stated by PkMnTrainer Yellow that the members of the RP's characters will each get their own individual ending based on all the interaction that goes on during the course of the RP. As it stands, the ending of the RP is still a ways away. That being said, there is no true preset path for any type of character. Students are free to improve or fail to improve at their own leisure, and are even permitted to join Team Rocket or refuse to attend classes as they wish. Teachers are slightly more strict in their ability to do what they please, though this is not saying much. Teachers that align againts the academy must do so in secret, as Team Rocket spies are only allowed to impersonate students. Team Rocket spies are also allowed to reform and attempt to live 'normal' lives as students. NPC teachers are provided in the absense of roleplayer controlled teachers, consisting of many of the gym leaders from the series and all of the champions except Iris and Alder.

The Roleplay is based off anime canonity with the exception of Generation 5. All Generation 5 content uses the video game canonity instead. PTA's time progression is broken up into days, which tend to take an indeterminate amount of realtime (often a month, two or more) in which students are assigned one class chosen by the GMs and are then free to spend the rest of the day freely interacting around the island. On occasion, special events such as holidays and field trips happen, allowing for some spice to the day. There is generally at least one twist to any given day. A basic leveling system is in place vaguely resembling the one in the games, however it is easily exploitable--although, there is no real benefit to powerleveling unless one believes having their character's pokemon be of a higher level will help them enjoy day to day tasks more.

The plot is only very briefly described. Presumably it will be expanded on in-character late in the roleplay. It is described as the academy being originally created because Professor Gary Oak vaguely has reason to believe that Team Rocket is planning something big enough to warrant a theoretical army of trainers. Thus, the academy was hearnestly created as a way to prepare young trainers for a suspected future challenge. In Character the plot moves along extremely slowly. 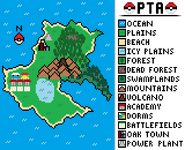 The Island as depicted in the roleplay's OOC thread

The Beach. Oak Town can be seen behind the shores.

Oak Town along the water. A colloseum-style battlefield can be seen in the distance.
Community content is available under CC-BY-SA unless otherwise noted.
Advertisement